Join now Sign in
Why Choose Us > Dating Blog > St. Catherine's Day, a Holiday of Femininity
Dating Blog
Back to list

At the beginning of winter, when all the field works were stopped, Ukrainian girls and women tried to entertain themselves while staying at home. That is why this season is so rich in rites and religious holidays, both Christian and pagan origin. Most of the spare time in winter was devoted to various divination. The single Ukrainian ladies and men were eager to find out when they were meant to find their best half soon or what kind of life is waiting for them. The Winter divination period begins on the feast of St. Catherine (December, 7), then on St. Andrew (December, 13) and lasts until the beginning of the Christmas holidays.

Who is St. Catherine?

According to beliefs, Catherine was the daughter of an Egyptian ruler, a very beautiful and intelligent girl. Though, she could not find a husband, who would be wiser than her. A Christian wise man who was her mentor became a match for her. But when the girl accepted his faith, she was killed for it. Her tortures became a plot of the painting kept in an Old Masters Picture Gallery in Dresden (see the picture below). Since then started a tradition of the commemoration of Saint Catherine’s Day on December, 7.

The day of the holy Martyr Catherine has been considered a women's holiday since ancient times. Despite the fact that the fate of the girl has not developed in the best way, she is still considered a patron of a happy couple, a feminine fate, so on this day, the girls dream of a happy future.

Wedded women on this day lit a holy three candles by the image - "so the family would grow further". If a lady put a candle and prayed to St. Catherine, then she would have a very happy couple. Single girls had their own rituals and divination.

In ancient times on St. Catherine’s day, Ukrainian women gathered at an evening party and divined until late at night. First, every lady cooked a pot of porridge with poppy or a jar of borscht, tied it with a new towel, which is a symbol of family. Then the lady went out to the gate and called her fate: "Fate, luck, come for dinner!" Women believed that their fate would hear them, would be kind and merciful to them.

Slavic ladies at St. Catherine’s day had many rituals. One of them was connected with different items of divination. They laid these objects under the plates so that nobody saw them and opened them in turn. If there was a ribbon underneath, the girl had to wait another year to meet her second half, and if a ring - she would soon be happy with her man. If a lady found a kerchief, she would become a single mother, and if a doll – she would soon give birth to a child. If a woman got across, it would symbolize a short life.

On this day Ukrainian ladies also went close to the neighboring houses and listened to the conversations. If communication was calm and peaceful, then the woman's fate would be the same. If a scream and a quarrel were heard, then fate would bring a lot of surprises.

Even men wanted to foretell on St. Catherine’s day. To do this, they cut a cherry branch and put it in the water. If the branch burgeoned with a lot of leaves until Christmas - the future wife would be beautiful, smart, and hardworking. And if it did not bloom - on the contrary.

Various rites and traditions have always played a significant role in the life of Ukrainian women and men. Though nowadays they are kept mostly in villages, they still unite Ukrainian folk with the ancestors, who praised nature much. I am pretty sure that every Ukrainian lady has tried to divine at least once in her life ;) Ask your Slavic woman to tell you about it and you will have a great topic for conversation in a chat!

If you wish to find out more about the rich national traditions, you may be interested to read more articles like Ukrainian genetic traits, Russian facial features. 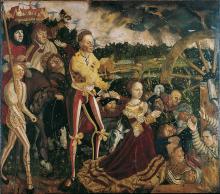