Romeo & Juliet is one of the most famous love stories ever written. Compelling, full of drama, and a journey towards romance. Ukraine has its very own story of love being formed, pulled apart, and reunited. A sculpture depicting an elderly man and woman locked in a warm embrace was erected in 2013 marking a love that lasted 70 years and survived distance, politics, and age. While the two protagonists in this true tale do not end up together, the story of their everlasting love is inspirational. This is the true story of Luigi Peduto and Mokryna Yurzuk…

During the Second World War, a forced labor camp was created in the Sankt Pölen, Austria. Many prisoners of war from all over the world were sent here to work, against their will, and many would never see home again. In 1943 Luigi and Mokryna would meet and begin slowly falling in love. He was a soldier and prisoner of war. Luigi had been serving in Croatia when, in September 1943, Italy requested an armistice while being invaded by the allied armies. His regiment was rounded up by the Germans and marched to Hungary. When here they were loaded onto trains to one camp where they were split. Those who were seen as skilled were sent to labor camps in Austria and Germany to help with the war effort. Luigi had been a tailor before the war and was taken to the Sankt Pölen and put to work. Mokryna was a forced laborer who was sent, against her will, to help with the Axis war effort. It was here, in the darkest of times, that they found a light that would help them through.

They met when they were charged with working on the same task. Mokryna was instructed to help a tall, handsome Italian man (Luigi) mix cement for a new barracks that was being built. While language proved to be a potential barrier to them creating a relationship they still smiled at each other, laughed, and began flirting. Their relationship began to blossom and they would spend as much time as possible with each other. Mokryna was unable to speak any Italian and Luigi’s knowledge of Ukrainian was limited, helped only by his time in Croatia and the language being similar to Russian, but he knew a few words. 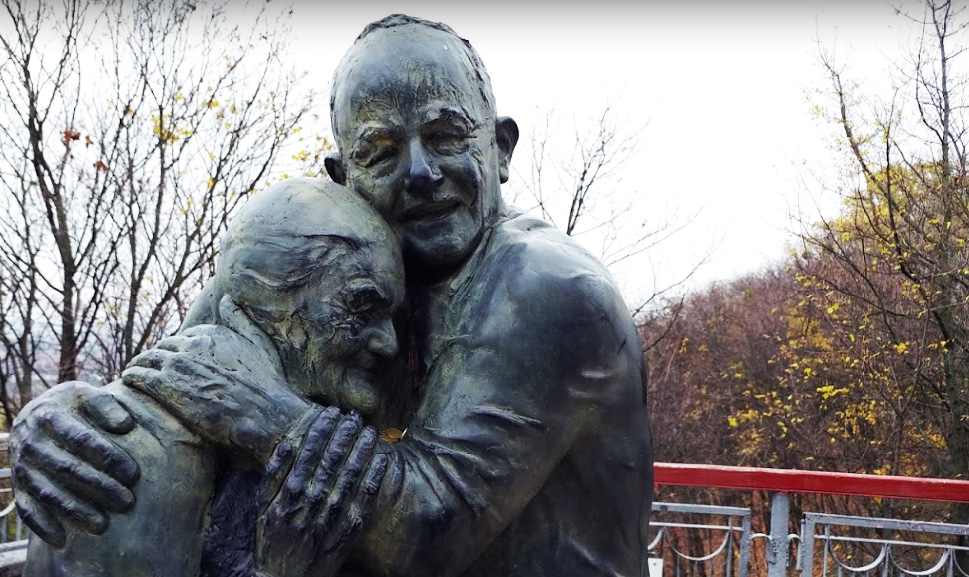 Three Ukrainian women were charged with helping Luigi and his Italian counterparts. The women were instructed to use harsh pieces of iron and a hammer to straighten nails all day long. They would have 15 minutes in the morning for breakfast in which the pair would be provided with a form of soup with a little piece of bread. During one of the days, Luigi noticed a young woman of around 23 years of age working on the same project as him. Upon hearing that this young woman, Mokryna, had a child Luigi decided to do all he could to help her. He began bringing her extra food that he earned sewing things for fellow prisoners.

While Luigi’s interest grew quickly, Mokryna was a bit cooler about the situation and so love at first sight did not occur. Luigi’s youth caused him to relate to Mokryna and her daughter, tugging at his heartstrings and causing him to fall in love with her. He had lost his mother at a young age and had had to look after his younger siblings. He felt for Mokryna and this lit a fire of love in him that would never be extinguished.

At the end of the war, they were freed from the Sankt Pölen and sent home to their respective countries. This may seem like a beautiful ending but unfortunately, this was not the case. The Iron Curtain would literally cut off many countries from the rest of Europe, including Ukraine which was, at this time, part of the Soviet Union. Mokryna was not given permission to travel to Italy and was unreachable behind the seemingly impenetrable Iron Curtain. 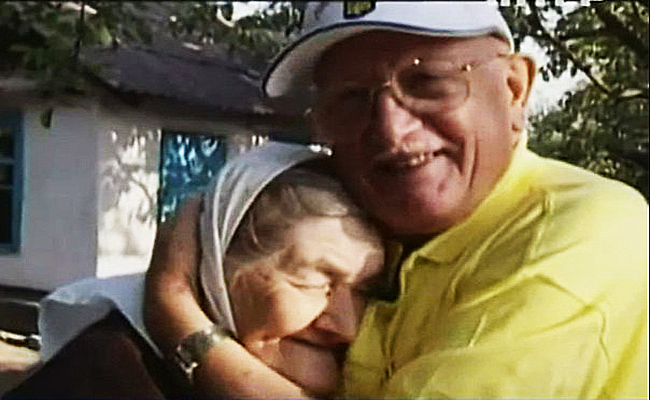 As time went on, reuniting appeared to be impossible and both of them had no choice but to live their lives and move on. Both of them got married, had children and grandchildren. However, Luigi’s love for Mokryna never disappeared. He kept a photo of her and a lock of her hair with him every day after their separation. Time passed but Luigi never forgot….and one day in 2004 fate intervened. A Russian TV show, called Wait For Me, would be a turning point in decades of separation. Luigi, now widowed, called upon a Ukrainian woman in his hometown, near Naples, to help him write to the show. He hoped that the clues he had held on to for all those years would help him reunite with his lost love.

After months of waiting Luigi finally received a phone call, on his birthday, saying that they wanted to fly him to Moscow to be reunited with Mokryna. Luigi wasted no time in sorting out his documentation and flying out to Moscow as soon as possible. Luigi nervously waited while on the show when, finally, Mokryna walked out to him to rapturous applause from the audience. This twinkly-eyed man was moved to tears and hugged Mokryna as tight as he could and showed her the lock of hair he had kept for all those years. Mokryna, while still moved by the whole situation, was, as she always had appeared, not quite as enthusiastic as Luigi. This was mainly due to shock and a very hard life on a collective farm. Mokryna’s life had caused her to tire and shut out many emotions she once had. However, she could still see the man she had fallen in love with all those years ago and was pleased to be back in touch with Luigi. 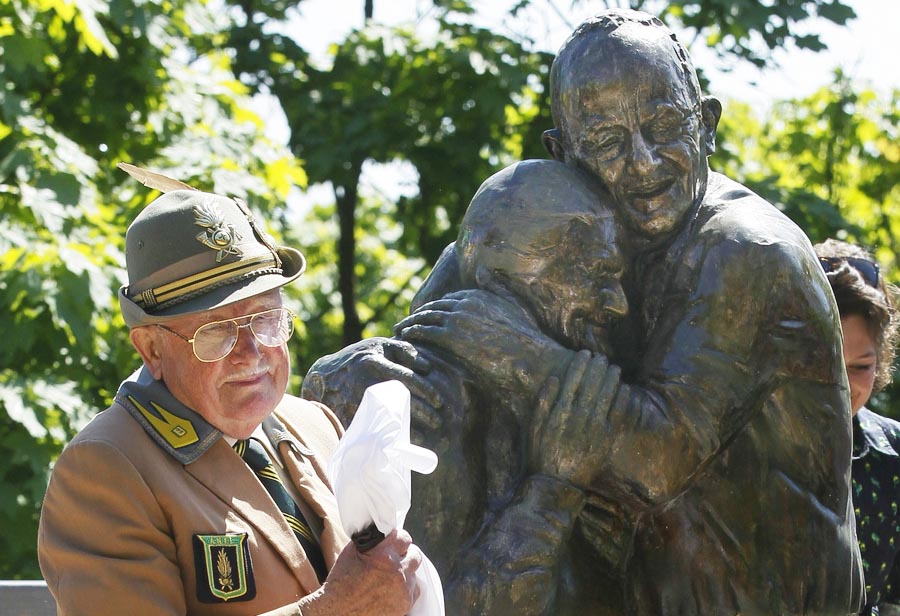 Luigi spoke with Mokryna about a potential proposal but was met with laughter and no response. Luigi was completely fine with this, after all, “how could she accept a proposal?” Luigi once said. From this day forward Luigi kept in touch, sending Mokryna packages of parmesan cheese and other items he felt would help her in her remote village. The news of his continued devotion to Mokryna led Kyiv to do something unexpected. Sergei Tselovalnik, the city's chief architect, created a statue depicting their love story in the hope that it would encourage others to become inspired and create enduring relationships. It was also a way of using love to move away from the city's communist past where only generals and heads of society were honored. 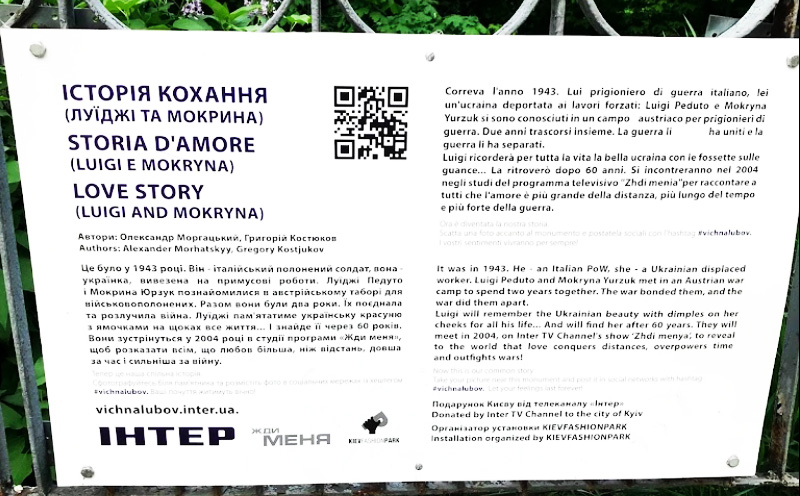 Luigi was able to travel to Ukraine to witness the unveiling of the statue in 2013. Unfortunately, Mokryna was too weak to travel to the ceremony but her relatives attended and it was reported that she was happy that her story of love would become a symbol for other couples. Mokryna passed away two years later in 2015. The statue is located near ‘Lovers Bridge’ which attracts tourists and Ukrainians alike. People admire the fact that the statue recognizes ordinary people and their trials and tribulations. It is also a symbol of how love can survive even the darkest and harshest of times. Love can truly last forever.

Four years later, on 30th April 2017, an exact replica of the statue was unveiled in Luigi’s hometown of Castel San Lorenzo. Unfortunately, he passed away in 2013 and did not see the statue that has inspired so many. The ceremony was attended by over one thousand people and, much like the unveiling in Kyiv, the world's media. It was always hoped that the pair would have been able to reunite again at one of the statues but they have now reunited to share their eternal love.

This is not a story that ends with two lovers running into each other's arms but is a tale of how a meeting in the worst of circumstances can create a bond so strong that it lasts over 70 years breaking down the barriers of distance, politics, and age. These two amazing people underwent the hardships of war, the disgraceful treatment of the labor camps, and decades of not knowing if the other was still alive and yet their love for each other never disappeared. Their statues are physical depictions of love's everlasting power and a reminder that you should never give up on love. The statues are inspirational and these two peoples' bond is beautiful, empowering, and eternal. This story shows that love will always prevail.