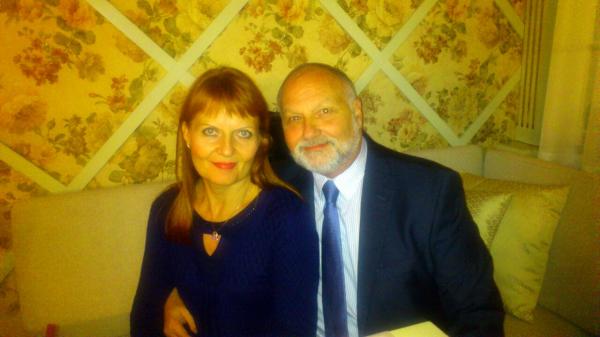 Have you ever thought that one may find love when already having grandchildren? You doubt this is possible?) Then read our wonderful story of love!

Olga and Robert were corresponding for a couple of months through the site and everything was fine. Robert was highly admiring lady’s beauty and character. He even suggested helping her adult son to relocate to USA. Olga liked Robert’s calm and balanced character, reliability and willing to support her.

The man decided to travel to Ukraine and meet Olga in person. They spent several wonderful days in Mykolaiv and communicated with the help of automated translator as Olga’s English was bad. After the first visit of Robert to Ukraine the couple continued to communicate. The correspondence lasted for 2,5 years as Robert had no opportunity to come again soon.

When he finally did, he arrived with an engagement ring and proposed to Olga. She accepted his proposal with sedate agreement as she already knew that this man is the one she is willing to spend the rest of her life with. Her son, daughter and grandson were present at their lovely ceremony in a registry office.

Olga’s interpreter recalls a curious situation that Robert once ordered a fluffy toy as a gift for his beloved. The thankful lady sent him a couple of photos of herself holding the toy. The man was shocked to see his blonde beauty with… red hair! Yes, men, ladies sometimes dye their hair without notifying you :) Thanks God, Robert found Olga’s new style very attractive, as the photos from the ceremony show him with his red-haired lady ;)

Besides, do you know that Ukrainian girls are remarkably attractive?