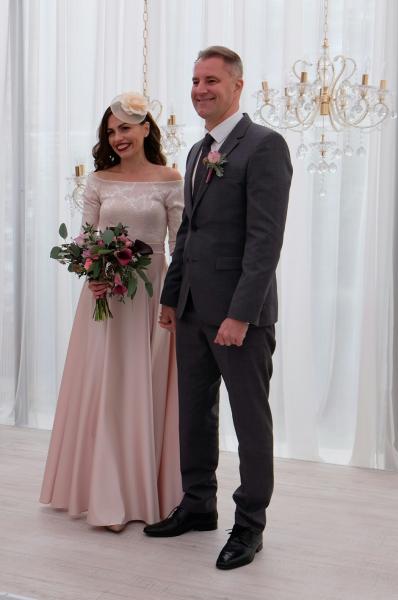 By her nature Eugenia is active, clever, determined. No wonder that she used to work as an administrator on a cruise ship. The lady has seen the world already, but had no special man in her life to share beautiful memories with. She worked in a financial sphere and attended professional development courses in Bremen. Her knowledge of German and English helped her much in that.

Mario is a decent person, a real gentleman, who was searching for his significant other as well. He and Eugenia communicated on the site for 2 months before they met. This has been a remarkable story itself!) The fact is that Eugenia was planning a week-long visit to her sister in Spain. She informed Mario about it, and he offered to meet for a cup of coffee at any airport on her way. The agreed meeting has happened as planned, though Eugenia didn’t tell her translator much about it afterwards. She was a secretive woman, it’s true.

In a month term the lady had a business transfer to Kyiv and decided to delete her profile from the site... Half a year later Eugenia’s friend got registered in SlavicGirl dating agency. Can you imagine the astonishment of her translator when asked to find a man similar to Eugenia’s husband Mario! It appeared that they had tied the knot in Ukraine several months before.

Such is a classic love story scenario of a couple matched by a dating agency. But SlavicGirl team doesn’t complain: for us the main goal is our clients’ happiness, no matter whether they inform us about it or not! ;)

An interesting fact about the couple:

you already know that Eugenia had studied at professional development courses in Bremen... the home city of Mario!. And after many years she is there again! Isn’t it a hand of destiny that brought this couple together?)