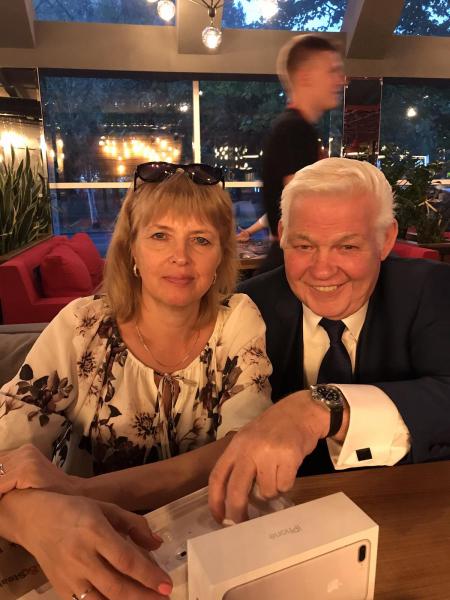 Sometimes time and pain make our feelings stronger…
This love story began at the end of 2018 when Natalia and Edwin started writing letters to each other. That was not easy for both of them to keep in touch regularly. Natalia had a simple mobile phone with no Internet, Edwin was often without Internet access because of his job. Natalia lived far from the city center, while the agency is located in the center of Mykolaiv. She also worked in a shop where she was not allowed to use the phone during her working hours. So, the only way for the agency’s translator to reach Natalia was to call her late in the evening, when she was not at work, and read to her the translation of Edwin’s letter, and write down her answer. Natalia didn’t know English at all, and her work schedule made her unavailable for video calls.

At times the connection between Natalia and Edwin was lost: the phone got broken, one of them got ill. Nevertheless, such breaks made the two of them appreciate their communication more and more. They managed to write jokes to each other, and show their mutual interest and understanding – as a result, Edwin decided to visit Ukraine and meet Natalia in person. That came true in August of 2019. The miracle has happened – Natalia and Edwin found out that their pleasant impression of each other in letters was confirmed in a real-time meeting.

They decided not to lose each other anymore. Edwin bought Natalia everything for fill-time Internet access to talk to him directly: a smartphone, a tablet, and an Internet card. Now they were able to say good morning and good night to each other – electronic translators were not bad, though sometimes wrong translation was the reason for misunderstanding and awkward situations. But when you have a sincere interest in each other and you are confident in your intelligent friend, you can overcome such misunderstandings, right?
Their second meeting happened at the end of 2019, they celebrated Christmas together. That was a happy time which helped to overcome the period of trouble and pain that came later. Edwin got seriously ill in the winter of 2020. One health problem occurred by another, then the life of the whole planet was changed by COVID-19. There was no possibility to meet each other again. Natalia was patiently waiting for better times. But suddenly a war broke out in Ukraine.

Still, every cloud has a silver lining - a simplified visa regime helped Natalia to go to Poland, and she is currently waiting for a visa to Great Britain to unite with Edwin! We hope this will be a year of happiness and reunion for those who really deserve that. Edwin and Natalia, never lose your connection!